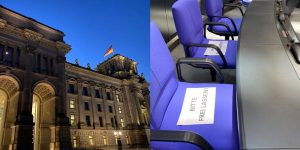 Sixteen members of the German Parliament from the CDU/CSU and the SPD – among them our second chairman Leni Breymaier – call on all prime ministers to keep the brothels in their countries closed. In view of the Corona crisis, it would be negligent to reopen the brothels for health reasons. In addition, the parliamentarians make it clear that they consider prostitution to be inhumane, destructive and misogynistic:

According to the resolutions passed by the Minister Presidents on their conference on 6 May 2020, further steps are scheduled to relax the corona-based rules of conduct. The German federal states are called upon to decide on easing restrictions in some commercial areas. We would like to begin by expressing our sincere thanks for your decision not to allow brothels to reopen yet. At the same time, we request and also strongly insist that this status quo should remain and that easing restrictions in the area of prostitution should not be allowed in the future.

On the one hand, it is obvious that prostitution would have the epidemiological effect of a super spreader, for social distancing is usually incompatible with sexual acts. The spreading of the virus would quickly involve many clients and their partners, families, friends and colleagues. When tracking the infection chain, this contact will often not be disclosed.

But we also want to state with all clarity the other, equally important reason: we consider the conditions for the great majority of people working in prostitution to be inhumane, destructive and misogynistic. Contrary to a widespread cliché, most prostitutes (especially Eastern European or African women) are by no means voluntarily in prostitution, but have been and will be deceived, blackmailed and threatened. The extent of sexual assault, of massive physical and psychological injuries caused by multiple, forced penetrations every day is unknown to many, including maybe yourself. The way clients think and act, enforcing their allegedly acquired right even against recognizable reluctance and disgust and humiliating the women, can be read, for example, in clients’ forums where the johns rate the “commodity”, the woman, as well as her “service”. The apparent normality of sex purchasing can be seen, eg, in the fact that graduation or bachelor parties celebrated in a brothel are no longer uncommon. Germany is internationally considered the “brothel of Europe”. A resolution of the European Parliament urges Germany to revise the current legal regulation.(1) More information on this as well as authentic reports from police officers, ex-prostitutes and (real) aid organizations can be found in the links attached at the bottom of this letter.(2)

Many aspects speak in favor of an introduction of the Nordic model, first applied in Sweden to punish the buying of sex. For clients and pimps, this can result in fines or imprisonment of up to one year, while the prostitutes are not criminalized. France, Norway, Iceland and Ireland have already followed this model, Israel will follow in July 2020; also in several other countries there are efforts to introduce this model. The assumption of the current Prostitute Protection Act that prostitution is a normal profession has already been refuted by practice. Last but not least, it has been confirmed in connection with the closure of the brothels that many women apparently do not have an independent, private existence with an apartment, registration, social security etc. After the shutdown, many of them (were) returned to their home countries, while others have remained in the brothels (and are now afraid that they will have to “work off” the “rental costs” additionally). Only about 33,000 of an estimated 400,000 prostitutes are meanwhile registered; less than 100 of them have a social insurance as employees (unfortunately, there are far too few customs controls targeting illegal work resp. bogus self-employment, compliance with the minimum wage etc.). Often no authority knows that these women are in Germany. They are at the mercy of their pimps. It is not the reopening of the brothels that will help these women, as can sometimes be read, but a ban on the purchase of sex and a job or a training in a job that ensures their livelihood.

Even if the Nordic model cannot prevent forced prostitution, it can most effectively disturb the market for such sexual exploitation and human trafficking in Germany, and it will strengthen the position of the prostitutes towards reckless clients and pimps. We will also continue to pursue this topic and hope we can count on your support, sending a clear signal by keeping the brothels closed.